It was probably impossible to live up to the expectations set up by the first season of HBO’s True Detective (2014), but contrary to what apparently everyone and their mother thought, this second dive into the lives of psychologically fucked-up cops and criminals is pretty damn good. In fact, it continues to be nothing like I’ve ever seen on television in terms of mashing up genre conventions and literary references in a way that could come across as trite but instead feels rather grand. Because you’d better believe that when writer/showrunner Nic Pizzolato – a major in English and philosophy – names one of his characters Antigone Bezzerides, or has the main antagonist utter lines such as “It’s like blue balls… in your heart,” he’s not merely writing “bad dialogue” for the sake of it. In True Detective‘s neo-noir balancing act, this stuff has poetic weight, and if you don’t believe me, just go back to season one and listen to Rust Cohle (Matthew McConaughey) say macho things like “The world needs bad men. We keep the other bad men from the door.” No one says shit like that in real life and gets away with it.

While True Detective‘s maiden voyage delved into the Southern Gothic in its overarching plot and atmosphere, this time around Pizzolatto sets his sights on the West Coast and the brutal killing of a dirty California city manager. Detective Ray Velcoro (Colin Farrell), Sergeant Ani Bezzerides (Rachel McAdams), and Highway Patrol officer Paul Woodrugh (Taylor Kitsch) are all assigned to the case, and just like in the first season their secrets and vices are more interesting than the knotty narrative of the mystery itself. 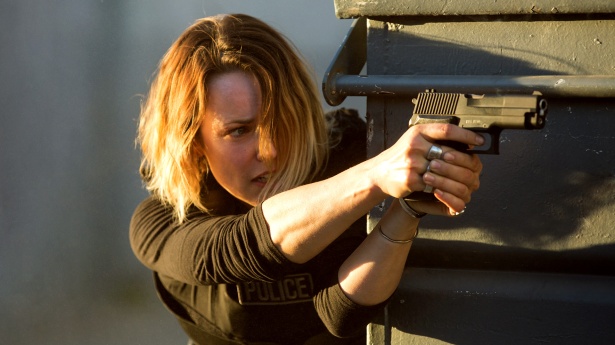 Does this season’s convoluted plot regarding shady land deals, double-crosses, and decades-old police department and government abuses pale in comparison to season one’s slow-burn confrontation with a monstrous serial killer? Maybe. I am not completely certain if that’s not on purpose – Pizzolatto’s probably taking a lead from some other classics of Los Angeles neo-noir, from James Ellroy’s L.A. Quartet (1987-1992) novels (in particular 1990’s L.A. Confidential) to films such as Chinatown (1974). One also cannot discount the influence of Raymond Chandler’s and Dashiell Hammett’s hard-boiled detective fiction, which I’m pretty sure informs a lot of his writing. However, it is true that by the end of the season the whodunit seems completely irrelevant, buried in the endless shots of twisted and tangled California highways.

Then again, if realism is what you’re looking for, then you’re better off with HBO’s other great detective show The Wire (2002-2008). True Detective likes to mix it up and keep you off balance, from the surrealism of a bar that almost seems to exist in a parallel universe, to the over-the-top tough-guy dialogue like Ray’s line to his son’s classmate, “You ever bully or hurt anybody again, I’ll come back and buttfuck your father with your mom’s headless corpse on this goddamn lawn.” I don’t know about you, but that’s one of the best lines ever written for TV if you ask me. And let’s not forget the intense mid-season shootout, a scene that would be right at home in a Sam Peckinpah film. After it was over, I looked around for stray bullets in my bedroom walls.

To me, the genius of this show is still in the existential and philosophical struggle of its characters: Ray works on the side as a mole and enforcer to local mobster Frank Semyon (Vince Vaughn), yet yearns to be a good father to his estranged son; Ani’s resilient demeanor belies childhood trauma and daddy issues; Paul has a spotty past in the Middle East and sexual identity problems; Semyon himself has conflicts as a gangster trying to break free from a life of violence that he can’t seem to shake. Pizzolatto continues to be fascinated by his characters’ search for meaning, trying to figure out who they are as individuals and achieve some measure of release from their demons. Farrell does some of his best work here as a man who’s just a shadow of what he used to be, his long dirty hair and bushy eyes doing most of the talking. Kudos also to Vaughn and McAdams, both playing against type and delivering vulnerable performances that stay with you.

As the main conspiracy is finally revealed, the four protagonists realize they can’t possibly fight against the forces they have uncovered. In fact, in order to survive they need to do something they aren’t comfortable with: Run away. But their inner struggles get the best of them. Paul is afraid a former lover (Gabriel Luna) will reveal his homosexuality, so he agrees to a secret meeting where he’s ultimately killed; Ani and Ray agree to make a break for Venezuela, but his last-minute decision to say goodbye to his son puts assassins on his trail; and Frank, facing a cartel member who tries to rob him of his suit, is stabbed. Their choices are not sound – they are, in fact, exceedingly stupid, given what’s at stake – but they are wholly consistent with their characters: Men driven by pride and their varying concepts of manhood, of what it means to be a husband/father-to-be (Paul), a good dad (Ray), or a hothead who will never let someone else bully him around (Frank). In the end, their false perceptions of themselves are their undoing.

Not so for Ani. Finally allowing herself to feel something real for a man, she makes love to Ray and gets pregnant. In the final episode we see her hiding with her baby in Venezuela. She’s apparently befriended Frank’s wife Jordan (Kelly Reilly), the only other person to have made it out alive. Because Ani has gone against her better nature – in fact, allowed herself to change – this hard-as-nails, unfeeling, impulsive detective (the male stereotype?) has been able to pull through, even becoming a mother in the process. I am not sure if Pizzolatto’s making a particular comment here about gender or if he’s just having fun with trope expectations, but it’s interesting that Ani and Jordan are the only ones left standing when the smoke clears. The season ends in an ambiguous note, as Ani gives all the incriminating evidence to a reporter and then disappears in a crowd, walking towards an uncertain future.

True Detective – Season 2 may not resonate in the same ways as the first season, but it still makes an impression. I, for one, am on board with Pizzolatto wherever this intriguing series may take him next.

For a different take, check out Gerry’s review in Strange Orphan Boxes.