based on the short film Oculus: Chapter 3 – The Man with the Plan by Mike Flanagan

Early on in Oculus, the second film from writer/director Mike Flanagan, there’s a scene in which Kaylie (Karen Gillan), an auction house employee, enters a storeroom and slowly approaches a huge old mirror. As she looks at her reflection on it, she whispers “Hello again. You must be hungry.” Creepy. But wait… she sees something out of the corner of her eye. Did one of those covered statues directly behind her… suddenly move?

At this point, I’m already covering my eyes. Kaylie approaches and, one by one, starts to take the sheets off. But she’s not scared – she’s determined. She uncovers the first one – nothing underneath. Then the next. Nothing. She pauses before going for the last one. Holy crap, now my eyes are fully closed. She grabs the sheet and… 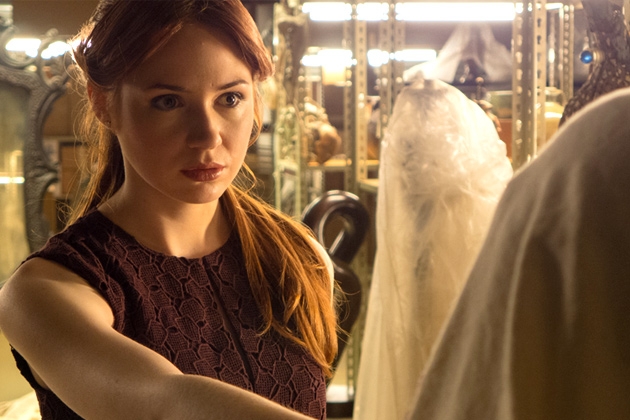 I won’t give it away, but it’s one of several moments in Oculus that elevate it above just another run-of-the-mill horror flick. You see, the mirror harbors a malevolent force responsible for the deaths of Kaylie’s parents eleven years earlier, and now she intends to destroy it forever. And while it feels at times like a rejected Stephen King short story, it’s certainly a step up from Flanagan’s earlier Absentia (2011), with a better command of mood, pace, and character.

At one point Kaylie starts to eat an apple, only to discover she’s been tricked by the mirror and what she’s biting into is actually a lightbulb. It’s incredibly simple… and terrifying.